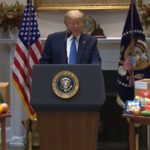 At the announcement of the details of the USDA’s Coronavirus Food Assistance Program on Tuesday morning, President Trump said he had read that the U.S. imports cattle and he suggested to Agriculture Secretary Sonny Perdue that trade deals allowing cattle imports should be terminated.

“We have a lot of cattle in this country, and I think you should look at the possibility of terminating those trade deals,” Trump told Perdue. The president later said, “I’m saying, why are we bringing in cattle when we have so much ourselves?”

Nearly all live cattle imports that come into the United States come from Canada and Mexico, and the Trump administration just completed a rewrite of the North American Free Trade Agreement (NAFTA) with the U.S.-Mexico-Canada Agreement (USMCA). So far this year, Mexico has exported 544,000 cattle into the U.S., of which about 80% are feeder steers. Canada has exported about 250,000 head to the U.S., of which just over 70% are animals direct for slaughter. Cattle imports from both Canada and Mexico are down slightly year to date from 2019, according to USDA reports.

“Today’s comment by President Donald Trump demonstrates the complexity of the U.S. beef business. Live cattle imports to the United States only come from Canada and Mexico and will continue to do so under the terms of the President’s newly negotiated USMCA. America has not imported live cattle from other nations for several years. However, if President Trump is serious about reconsidering import decisions, NCBA and its members strongly request the White House to take another look at his decision to allow fresh beef imports from nations like Brazil, where there continue to be concerns with foot-and-mouth disease and USDA’s decision to reopen the American market to Brazilian beef.

“Beef trade is a complex business, and America’s cattle producers rely on safe and reliable international trading partners, both as a destination for the undervalued cuts we produce here, such as hearts, tongues, and livers, and for importation of lean trim for ground beef production to meet strong consumer demand. Approximately 12 percent of beef consumed in the U.S. is imported product, but that product must meet the U.S. standards for safety before it is allowed into our market.

“President Trump has shown his willingness to negotiate difficult trade deals and take on tough trading partners, and NCBA thanks him for the attention he has given to beef. We encourage him to re-examine the decision to reopen the market to imports from Brazil, Namibia, and any other nation where there are food safety or animal health concerns that could impact American consumers or cattle producers. A re-evaluation of those imports can accomplish his goals of protecting both American cattle producers and American consumer confidence in our own beef supply chain.”

Ranching for Profit for Young Adults