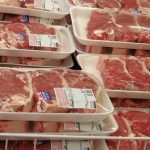 U.S. pork exports posted new volume and value records in 2019, reaching nearly $7 billion, according to data released by USDA and compiled by the U.S. Meat Export Federation (USMEF). Exports of U.S. beef were below the previous year’s record levels, while lamb export volume was the second largest on record.

The decline in U.S. beef exports from the record levels of 2018 was partially attributable to lower shipments to Japan, which were down 6% in both volume (311,146 mt) and value ($1.95 billion). Similar to pork, Japan’s tariff rates for U.S. beef were lowered on Jan. 1 to match those of major competitors, with rate for U.S. beef muscle cuts dropping from 38.5 to 26.6%. Another tariff rate cut will come April 1, when the Japanese fiscal year begins. December exports to Japan were slightly above year-ago levels in both volume (24,056 mt) and value ($144.6 million).

“It was gratifying to see beef exports to Japan perform so well in December, given that the first tariff rate cut was pending and set to take effect Jan. 1,” said Dan Halstrom, USMEF President and CEO. “Buyers in Japan have been waiting a very long time for tariff relief and have already responded enthusiastically. We look forward to solid growth in 2020 and beyond.”

South Korea made a strong push to become the leading value market for U.S. beef in 2019, finishing a close second to Japan at a record $1.84 billion (up 5% from a year ago). Korea was also the second largest volume market for U.S. beef at 255,758 mt (up 7%, also a new record). The United States captured a larger share of Korea’s chilled beef imports in 2019 at 62%, up from 58% the previous year. U.S. beef accounted for 51.5% of Korea’s total beef and beef variety meat imports and more than one-third of Korea’s total beef consumption.

“U.S. beef is achieving remarkable success in Korea’s traditional retail and foodservice sectors and is well-positioned to capitalize on growth in e-commerce, the institutional sector and other emerging sales channels,” Halstrom said. “As U.S. beef moves steadily toward duty-free status in Korea, it becomes accessible and affordable for a wider range of customers whose appetite for U.S. beef continues to grow. We are seeing many new menu concepts in this dynamic market and continued excitement about U.S. beef.”

Beef exports to Taiwan were record-large for the fourth consecutive year in 2019, climbing 6% from a year ago in volume (63,538 mt) and 3% in value ($567.1 million). This growth is also driven by success at foodservice and retail as Taiwan continues to embrace alternative cuts and U.S. beef is underpinning overall consumption growth. The United States dominates Taiwan’s chilled beef market, capturing approximately 75% of its chilled imports – the highest share of any Asian destination.

“Despite retaliatory duties and the other barriers U.S. pork faces in China, exports to the China/Hong Kong region closed 2019 with tremendous momentum,” said Halstrom. “We look forward to continued success in 2020, especially if U.S.-China trade relations continue to trend in a positive direction. The coronavirus situation is certainly concerning and disruptive, but it hasn’t dampened our enthusiasm for the potential this market holds for U.S. red meat.”

Australia is expected to see reduced beef production and exports, which will reduce exports to the U.S. and other global markets and may allow the U.S. to surpass Australia as the third largest beef exporting country. Less beef from Australia will contribute to a projected decrease in U.S. beef imports in 2020. The U.S. may see reduced beef imports as several major beef exporting countries, such as New Zealand, redirect increasing amounts of beef to China, which continues to dominate global beef trade.  Improved beef trade prospects are part of the general optimism for stronger cattle and beef markets in 2020.