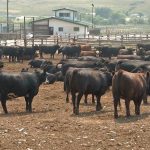 A new report gives a failing grade to 22 of 25 burger chain restaurants relating to the use of antibiotics in their beef supply. And ranchers are expressing their frustration over the report’s claims.

“It’s unfortunate because of the attempts we’re trying to make to develop a safe product and we don’t want to put a product out there that isn’t” said Richard Sidwell of the Sidwell Ranch near Columbus, MT.

The authors of the annual Chain Reaction report claim that ranchers are overusing antibiotics in their livestock an accusation that Sidwell disagrees with.

“We have to anymore go to the veterinarian to get any antibiotics whether it’s in our feed or buying it to use it on livestock” said Sidwell. “So, with that, we know from the day they’re born until we harvest them where the cattle have been and what’s been used on them and we don’t want to put out a product in any way that’s going to be harmful to the public.”

The National Cattlemen’s Beef Association’s Senior V.P. of Government Policy Colin Woodall says the beef industry promotes the responsible use of antibiotics to keep potential risk of developing antibiotic-resistant bacteria extremely low and this new report isn’t based on science.

“This report is nothing but garbage and the reason I say that is just because a group puts out a report doesn’t mean it’s based on science or fact” said Woodall. “I think we need to keep that in mind to this particular report by just looking at the people who put it together which includes the Public Interest Research Group, Consumer Reports, the Natural Resources Defense Council, Friends of the Earth and the Food Animal Concerns Trust. One, these aren’t groups know for their science background or their expertise and more importantly they’re activist groups that don’t like beef consumption at all and they’re just trying to force their agenda which is to eliminate the use of antibiotics in this industry.”

Ranchers like Sidwell say the beef community has invested significantly in research and education programs like Beef Quality Assurance to maintain high standards of animal care and health.

“In this industry we try to pick genetics that are in healthy cattle and do the best job we can” said Sidwell. “We’ve done a great job of getting our vaccines so we don’t have to use as many antibiotics and we try to stay away from it. We have quality assurance programs that make sure we vaccinate the livestock in the right locations so we don’t ruin any product or meat.”

The report urges burger chains and lawmakers to take action saying “Policymakers should only allow beef producers to use medically important antibiotics under the guidance of a licensed veterinarian, and to treat animals diagnosed with an illness or to control a verified disease outbreak.”

But, the U.S. livestock industry argues they’re already doing this and that the majority of antibiotics used in livestock aren’t even approved or used in humans.

The Centers for Disease Control doesn’t lay all that blame for antibiotic-resistance on the use of antibiotics in livestock production. The CDC says about 1 in 5 drug-resistant infections in humans comes from food animals, but that 1 in 3 prescriptions for humans by physicians are unnecessary.