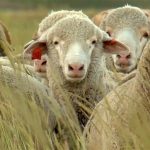 The American Sheep Industry Association and its state affiliates submitted letters this week to members of the U.S. Senate Finance Committee and the U.S. House Ways and Means Committee to express industry concerns about allowing lamb from the United Kingdom to be imported into the United States.

“While it remains to be seen what the domestic subsidy structure will look like once the United Kingdom is no longer in the Common Agriculture Policy under the European Union, the current situation is that U.K. sheep producers are highly subsidized,” read the letters. “This has been confirmed by numerous articles on the topic in the lead up to the U.K.’s exit from the E.U., as has the fact that the U.K. views the U.S. as a potentially lucrative market for lamb and sheep meat exports.”

Articles from a variety of agriculture and business publications have added to ASI’s concerns that allowing lamb and sheep meat imports from the United Kingdom places that country’s producers at a competitive advantage compared to American sheep producers.

“While sheep producers in both the U.S. and U.K. face some of the same challenges – such as high land and labor costs – the U.S. remains unique. Domestically, producers contend with a tremendous loss due to predation – which is growing as attitudes shift away from existing management of predatory species – and must overcome challenges of the great distances between areas where lambs are raised, where they are fed and where they are finally processed.

“As seen from the discussion in the U.K. press, the opportunities for U.K. lamb in the United States are readily recognized. This potential becomes more evident as the U.K. faces future barriers to entry into its traditional export markets in the European Economic Area. Should the final ‘Brexit’ agreement not allow preferential treatment for U.K. lamb exports to the EEA, upwards of a third of their production will need to find a new market. Respective tariff rates for U.K. lamb and sheep meat into the E.U. markets under a no-deal Brexit could range from 28 to 76 percent, depending on the sheep meat product exported.

“U.S. lamb producers are struggling under the weight of imported lamb and sheep meat, primarily from Australia and New Zealand. Over the past five years, imports from these countries have accounted for on average 164 percent of commercial lamb and sheep meat production in the United States. Currently, this is exacerbated by the strong U.S. dollar, particularly in relation to the Australian dollar. The scope of this import situation presents a tremendous challenge to U.S. sheep producers.

“The U.S. is the most open market in the world for lamb, and among the highest valued. There is not a market opportunity in the world for U.S. sheep producers that can offset the loss of our domestic market. Even with reciprocal trade in lamb and sheep meat with the U.K., that is not likely to be a lucrative market for American lamb, especially as New Zealand lamb has decades of presence in that market.

“We understand supporting trade initiatives like the U.S.-U.K. negotiations for their potential benefit to both economies, but absolutely believe unrestricted trade in lamb and sheep meat from the U.K. would greatly jeopardize the domestic production of lamb, the livelihood of America’s 100,000 sheep farmers and ranchers, and the rural communities that depend on them.”