OMAHA (DTN) — The Trump administration is proposing dramatic cuts to the farm safety net in the president's first budget plan being delivered to Capitol Hill on Tuesday.

The plan proposes tighter caps and means testing for crop insurance subsidies and eligibility for commodity programs. It also would eliminate the Harvest Price option for crop insurance. Combined, the White House is detailing more than $38 billion in cuts to farm programs, crop and conservation over 10 years.

Mick Mulvaney, director of the White House Office of Management and Budget, told reporters Monday the Trump administration's first official budget plan was “through the eyes of people paying the taxes.” Mulvaney said spending is merited based on the number of people a program helps and whether that spending is justifiable to taxpayers. “We simply cannot continue to measure our compassion by the amount of money we've spent,” Mulvaney said.

Ag supporters on Capitol Hill will likely be among the chorus declaring the budget proposal dead on arrival, but the White House's 10-year budget plan also raises questions about what the administration expects to see in the next farm bill. Mulvaney said some of the changes proposed may need to be done through the farm bill.

Looking at crop insurance, the White House proposes limiting the premium subsidy to $40,000, which would generate $16.2 billion in savings over 10 years. Such a cap in premium subsidies was pushed in the Senate during the last farm bill but was defeated.

The White House scores out another $11.9 billion in savings over 10 years by eliminating the Harvest Price option on crop insurance. Roughly 76{43a21437b022293ea22983a65937d7e18883fb2ff2b11e03a1041d36bd400603} of all crop insurance plans last year had that Harvest Price option, accounting for the bulk of covered crop acres and premiums in the crop-insurance program, according to USDA data.

Crop insurance cuts may be hard for Congress to swallow. In 2015, lawmakers reversed $3 billion in cuts to crop insurance over 10 years almost immediately after they were enacted after the Obama administration cut a budget agreement with Congressional leaders.

The Trump administration's proposals call for significantly more cuts to crop insurance than proposed by the Obama White House. Obama had pushed for $16 billion in cuts to crop insurance over 10 years by lowering the premium subsidy for the Harvest Price Option and reducing payments for prevented planting claims. Those proposals never got anywhere in Congress.

The Trump administration also wants to eliminate both direct commodity payments and eligibility for farmers with more than $500,000 in adjusted gross income. Combined, the two proposals would generate just over $1 billion in savings over 10 years.

Under the 2014 farm bill, farmers are eligible for commodity payments as long as their adjusted gross income averages under $900,000 a year over a three-year period. There is no income means testing for crop insurance.

The plan also would “streamline” conservation, leading to $5.75 billion in cuts to conservation programs over 10 years.

The USDA portion of the budget spreadsheet released by the White House Office of Management and Budget to reporters on Monday also shows $3 billion in cuts by of various smaller programs at USDA.

The White House also looks to shift more USDA functions to user fees over time. For instance, meatpackers would pay USDA $5.9 billion in user fees over 10 years for meat safety inspections. The Animal and Plant Health Inspection Service, the Agricultural Marketing Service and the Grain Inspection, Packers and Stockyards Administration also would collect a combined $700 million in higher user fees during the next 10 years.

Another line item for USDA under the budget is $477 million in savings from eliminating the Rural Economic Development Program.

Agriculture Secretary Sonny Perdue is expected to say more about the budget in a press call on Tuesday and in congressional budget hearings later in the week.

One of the biggest 10-year savings in the Trump budget is $190.9 billion in cuts to the Supplemental Nutrition Assistance Program, or food stamps. The White House proposes more restrictions on single adults on SNAP. Mulvaney noted that SNAP rolls have not come down to pre-recession levels for various reasons.

“If you are on food stamps and you are able-bodied, we need you to go back to work,” Mulvaney said.

Much of the federal savings for SNAP would come from shifting costs to the states. Mulvaney said shifting costs would give states “more skin in the game and help us because you know how to make the programs better and save us money.”

Perdue was asked about block granting SNAP at a House Ag Committee hearing last week. “As far as I'm concerned, we have no proposed changes,” Perdue said at the time. “You don't try to fix things that aren't broken.”

While proposing significant cuts across the federal government, the plan does call for spending $160 billion over five years on a new infrastructure initiative and up to $200 billion over 10 years.

While the budget proposal forecasts reduced growth in spending over 10 years, the White House did not make any projected changes to take collections over that period that would be due to changes in the Tax Code proposed by the president. For instance, the White House wants to eliminate the estate tax, but the budget plan builds in $328 billion in estate tax collections over 10 years.

The budget also proposes including nationwide paid parental leave, which Mulvaney said would actually add to economic growth because people would not be afraid of losing their income for taking time off to have kids. 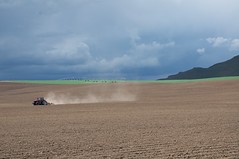