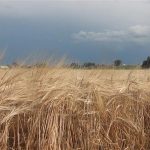 A historic trade agreement between the U.S. and Japan was signed today at the White House. U.S. Trade Representative Robert Lighthizer and Japanese Ambassador Shinsuke Sugiyama, sat down beside President Donald Trump at the official signing ceremony to reduce or eliminate tarriffs on $7.2 billion of U.S. food and agricultural products.

U.S. Senator Steve Daines today joined President Trump at the White House for the official signing ceremony and had this to say after the ceremony, “Today is a historic day for Montana ag, as this trade agreement will help level the playing field for Montana ranchers and farmers in Japan’s critical export market,” Daines said. “It was an honor to have led this fight in the Senate on behalf of Montana’s farmers and ranchers and I was thrilled to join the President today at the White House as he signed this critical deal.”

Montana Stockgrowers Association President, Fred Wacker, joined Daines at the White House today as well and commended Daines’ leadership during the negotiation process. “This beef agreement is the most significant beef agreement Montana’s cattle ranchers have ever seen,” Wacker said. “I appreciate Senator Daines’ leadership in getting this done, and it was an honor to represent Montana’s ranchers and the Montana Stockgrowers Association at the White House today.”

According to National Cattlemen’s Beef Association, in 2018 Japanese consumers purchased $2.07 billion of U.S. beef. Prior to the trade agreement, U.S. beef faced a massive 38.5 percent tariff in Japan, while our competitors from Australia, Canada, Mexico, and New Zealand had a 26.6 percent tariff.