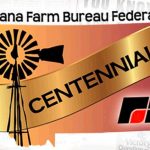 The donation came from proceeds raised during YF&R Hoofin’ It for Hunger Race ($6900) as well as the Centennial Challenge for Change ($1400). The race was held Oct. 12 at Fort Keogh Agricultural Research Station in Miles City. This was the ninth year for Hoofin’ it for Hunger, which was launched during the Montana Farm Bureau Convention in Missoula in 2011 as part of the national Young Farmers and Ranchers work with the Harvest for All program. As part of a nationwide effort the Young Farmer and Rancher Committee challenged members of the Promotion & Education and Women’s Leadership Committees to collect money with their “Centennial Challenge for Change” during county Farm Bureau Annual Meetings.

“We are so thankful for the relationship we have with Montana Farm Bureau Federation. The Hoofin’ it for Hunger event has raised more than $58,000 for the Montana Food Bank Network. That amount equates to 174,000 meals provided for children, seniors and families in Montana,” said Tonya Dvarishkis, board member, Montana Food Bank Network who accepted the donation. The Missoula-based Montana Food Bank Network secures and distributes donated and low-cost food to nearly 150 hunger relief agencies throughout Montana.  “The Farm Bureau Young Farmers and Ranchers decided years ago that helping to end hunger in Montana was important to them and they have never wavered in their efforts to give back their time and funding to this important cause. We are very appreciative.”

YF&R Chair Gil Gasper, noted, “Once again, our Young Farmers and Ranchers Committee was thrilled to be able to donate proceeds from our Hoofin’ it for Hunger race to the Montana Food Bank Network to help provide food for those in need. As young farmers and ranchers, producing food is important to us, and we see this as a great way to share the bounty. I want to thank everyone involved in Hoofin’ it for Hunger as well as everyone who contributed at the county level to our Centennial Challenge for Change. Our initial goal of $100 donated at every county Farm Bureau annual meeting far exceeded that amount due to the generosity of our members.”