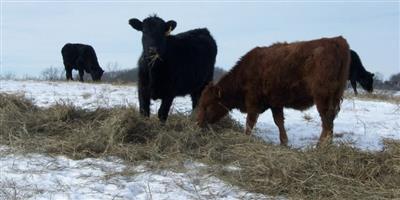 NASHVILLE, Tenn. (February 2, 2017) – After a volatile year, stability is returning to global commodity markets, at least for the time being, said CattleFax CEO Randy Blach this morning during the popular CattleFax Outlook Session at the 2017 Cattle Industry Convention and NCBA Trade Show.

“After the market shocks of the past year and an approximate correction of 50 percent in all commodity markets, prices are beginning to stabilize,” said Blach. “That doesn’t mean that we’re past this, or that prices have bottomed, but on a global basis, we’re not likely to see as much volatility during the year ahead.”

He said the industry is continuing to become more current in its marketings and cattle feeders are seeing a return to profitability, the first step in helping to stabilize prices for cow-calf and stocker operations.

Blach said that in the near-term, capacity is going to continue to be a significant issue for packing companies in both the beef and pork sectors. A shortage of available labor and an increase in protein production in beef, and poultry will continue to keep the packing sector in the driver’s seat during the year ahead.

“With limited processing capacity, the leverage shift in the marketplace will continue toward the packing, retail and foodservice segments for the time being,” said Blach.

During 2017 and beyond, margins are likely to tighten for cow-calf producers with more stability but also an expectation for lower highs and lower lows. CattleFax analysts noted that the cow-calf sector will shift focus to finding efficiencies, reducing cow costs and improving productivity to remain profitable. Analysts estimated 2017 price expectations for steers at $150 per hundredweight (cwt.) with a range of $130-170/cwt. while steers will average $130/cwt. with a range from $120-140 during the year ahead.

Blach reported that the historical cattle cycle remains intact, although the price break experienced in 2016 was the fastest and deepest of any in recent history.

“Even with the rapid growth in the U.S. cow herd, numbers are expected to continue higher for the next two-to-three years,” said CattleFax Senior Analyst Kevin Good. “Absolute price lows likely will not be realized until that period of increasing cow herd numbers is behind us.”

Good echoed the expectation for prices to stabilize during 2017, making price and production risk management an easier task for producers. He said fed steer prices will average $110/cwt. with a range of $98-$124/cwt. and the composite Choice cutout will trade from $168 to $204/cwt. with a 2017 average price of $185/cwt. for the year. Grain prices have also stabilized and corn is projected to trade from $2.90-$3.95 per bushel with an average of $3.45 per bushel.

Meteorologist Art Douglas, professor emeritus at Creighton University, said the signs of a return to El Nino conditions are already becoming apparent in the Pacific Ocean, which bodes well for portions of the country.

“The upcoming spring forecast calls for improved moisture from Texas to Minnesota and this will be an ideal setup for spring wheat. The drought in the Southeast will be retracting in the spring while a drier spring weather pattern is forecast for the northern Rockies. Persistent ridging will keep the western third of the country warmer than normal in the spring and the dry areas of the far Southeast will also be warmer than normal,” said Douglas. “Temperatures will be cooler than normal through the Corn Belt in the spring and with wet weather forecast for the western Corn Belt, there could be problems with field work and spring planting.”

He said the upcoming summer is expected to follow the typical pattern observed with developing El Nino events.

“Midwest summer temperatures will be near to slightly below normal. A persistent trough of low pressure is forecast to persist through the Mississippi Valley through the summer and this will favor cooler than normal temperatures in the plains and above normal precipitation from the Gulf Coast to the mid-Mississippi Valley and Ohio Valley as well as the Southeast,” said Douglas. “The summer monsoon in the Southwest is likely to be weak as the monsoon high pressure struggles to become established in the plains. The Northwest is expected to have a warmer- and drier-than-normal summer due to persistent ridging.”

NCBA Convention Conversations brought to you by LongRange

What Delisting the Grizzly Bear Could Mean for Your Ranch