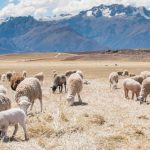 Following lawmakers’ requests to the U.S. Department of Justice (DOJ) to open an investigation into the acquisition of the Mountain States Rosen (MSR) lamb processing plant by JBS USA. The DOJ is said to have put a “stand-still” on the Greeley, CO. plant.

Brad Boner, Chairmen of Mountain States Lamb Cooperative, told Northern Ag Network “they have not had any direct contact with the DOJ but have heard from third hand sources the stand-still will restrict JBS USA from doing anything with the plant for 30 days.” The order does not change the sale but will likely buy time for the DOJ to complete their investigation.

Boner backed that theory by stating “MSR is a defunct entity, but it [the Greeley facility] could possibly remain a lamb plant.”

Northern Ag Network reached out and received a quick response from Cameron Bruett, Head of Corporate Affairs for JBS USA and Pilgrim’s. “We officially acquired the facility last week,” said Bruett. “Given recent interest in the transaction, we agreed to not make any material changes to the facility for 30 days as a sign of good faith. During that time, the Department of Justice will have the opportunity to review any concerns raised. We welcome their review.”

Bruett added, “Last week, we also offered to lease back the facility to the former owners for 90 days to ensure continuity for local producers, but we were again informed this was unnecessary given the opening of a new lamb processing plant in the region this fall. This was our fourth offer to continue operating the facility as a lamb plant on behalf of producers.”

The acquisition by JBS USA was finalized this past Friday, and the Brazilian owned meat packing company said they plan to turn the location into a value-added beef operation. The announcement was met with strong opposition from many in the sheep industry and prompted legislators from five western states to intervene through a bicameral letter to the DOJ.

The lawmakers requested a temporarily suspension of the sale. The members of Congress commented that the DOJ must “demand that JBS cease from any irreversible actions that might harm the ability of American sheep ranchers to get their products to market until the Department can determine how best to protect competition in this significant part of America’s food supply.”

JBS USA had successfully bid for the facility during a bankruptcy auction on July 16.