The new world record for corn yield is 503.7910 bushels per acre and it was produced in 2014 by Randy Dowdy of Valdosta, Ga. In fact, four certified yields produced for the National Corn Growers Association (NCGA) National Corn Yield Contest bested the yield record set just last year, in 2013. All four of these entries were produced in the South under irrigation.

The results of the annual contest were released Friday morning by the NCGA. The 2014 Corn Yield Contest drew 8,129 entries. A record six national entries surpassed the 400-plus-bushel-per-acre mark. 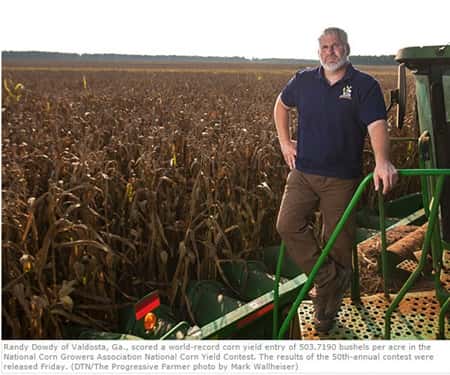 “While this contest provides individual growers a chance for good-natured competition with their peers, it also advances farming as a whole,” said Don Glenn, chairman of NCGA’s Production and Stewardship Action Team. “The techniques and practices contest winners develop provide the basis for widely used advances that help farmers across the country excel in a variety of situations, including drought.”

“Disbelief,” is what Dowdy recalls when the record yield emerged last August from a continuous-corn, twin-row field. “But I knew it was a good one.” Dowdy had set a long-term yield of being the first U.S. producer to top 500 bushels in the contest. He did not expect it to happen this year. His production accomplishment is nearly 49 bushels per acre more than the 454.9837-bushel mark set one year ago by David Hula of Charles City, Va. Dowdy hit 500 bushels with his irrigated entry in this, the 50th year of the corn yield contest.

“I hope farmers realize the value of the potential in all hybrids,” Dowdy said. “But it’s not just the hybrids. It’s also God’s favor, the weather and management.”

Of the 18 national first-, second- and third-place winners in six contest categories, Dowdy took six places. In addition to the record, he grabbed a second in the no-till/strip-till, irrigated class of the contest with 457.8766 bushels per acre, just shy of 3 bushels over the previous record. He also took a third place in the no-till/strip-till, irrigated class of 444.1493 bushels.

The Georgia producer also broke into the elite ranks of soybean growers in 2014 with three certified 100-plus-bushel yields ranging from 108 bushels per acre to more 110 bushels.

Hula placed the second-highest yield entry in the corn yield contest. He grew a 476.2201-bushel yield for first place in the no-till, strip-till irrigated class. That is 21 bushels more than the record Hula grew in 2013.

“We want the plant to stay healthier, greener, longer,” Hula said. “In my mind, as long as the crop is healthy and green, it is continuing to pack energy into the ear.” Hula said his crop grew in a summer that was cooler than normal, a condition that was most helpful during pollination. “It allowed the genetics to do all they can do,” he added.

Hula has been building his capacity to apply nutrients through his irrigation units. With one turn of an irrigation unit, he applies 30 pounds of 30{28d451f77a4de8a52cd2586be6cc1800527fe70ea84e8b3f90098495d088e086} UAN with a couple of pounds of sulfur. A couple of days later, Hula applies 30 pounds of potash with another turn. He alternates these applications every few days in the two to three weeks before tasseling.

Steven Albracht’s target yield remains 500 bushels, and he took another practiced swing at it in 2014. Albracht of Hart, Texas, also produced an entry beating the 2013 record. He achieved 459.4484 bushels per acre, about 4.5 bushels above that mark. Albracht said the summer was abnormally cool in Texas, too. He remembers a stretch of nearly two weeks with little sun. He thought that might hurt his yields, but apparently did not. Albracht typically planted his fields at a rate of 40,000 seeds to the acre.

“It was just a regular corn field,” Albracht said. “I was trying different things.” He added a new flex-ear hybrid into his hybrid lineup, adjusted his pop-up fertilizer program and added two additional fungicide applications.

Albracht bought a new planter for 2014. Nothing new there — he changes often and isn’t tied to one brand — but this one is equipped for applying a pop-up fertilizer, something he has used off and on through the years. In 2013, he mounted 110-gallon tanks on the planter and dribbled the fertilizer in with the seed. Results convinced him to make pop-ups a more permanent practice on the farm.

“We’re putting phosphate, zinc, boron, a little nitrogen and several other elements in a commercial brand of trace mineral into the furrow at different rates to see which rate does best,” he said.

Dowdy’s yield came from a tough-to-farm soil that clods. In the past, he has planted 52,000 seeds to the acre in it, only to see 32,000 plants emerge. He has worked to increase the soil’s organic content with late-planted peas and cover crops. This year, a 4-inch rain right after planting broke down the clods and 52,000 plants emerged. Importantly, all the plants emerged within 24 hours.

Dowdy did not grow up on a farm, but has in eight years shot into the upper ranks of the nation’s best corn growers. That acclaim is supported by his previous 400-bushel entries in the Corn Yield Contest, on top of his performance in 2014. He spends entire days addressing yield-limiting conditions, large and small.

“The best thing I can see in my corn field is my shadow,” he once told a reporter for DTN/The Progressive Farmer. “You need to understand what’s going on in the field.” He looks for even emergence, the efficacy of seed treatments, disease pressure, leaf architecture and other things. “If I have 20 leaves at VT, I have a more factory there,” he said. Those places are opportunities for Dowdy to invest resources that may tease out additional yield.

Dowdy’s high-yield formula is straight forward: Plant stress equals yield lost. “You either eliminate stress, or you address it,” he said. “I try to treat every acre so it can give me all it can.” He farms 1,700 acres, which 470 acres of corn, 300 acres of peanuts and 200 acres of double-crop wheat and soybeans. His practices are reported on his website www.growbigcorn.com and has a reputation as an aggressive, opinionated, outspoken manager, suspicious of conventional thought.

“I am naturally inquisitive, naturally competitive and naturally not status quo,” he said. “I came out of my mother’s womb asking ‘Why?'”

This Georgia grower is not out to win contests, he said, although he is rather good at it. He said his cropping experimentation concentrates on return on investment. He chases a difficult result. Practices applied to 32,000 plants per acre may not work with any expectation of mathematical proportionality at 40,000 plants.

Class A includes all other states with NCGA corn yield contests. For each below is name or farm name; town and state; hybrid used; and the certified yield.

Winners receive national recognition in publications such as the NCYC Corn Yield as well as cash trips or other awards from participating sponsoring seed, chemical and crop protection companies. During the 2015 Commodity Classic, in Phoenix, Ariz., winners will be honored during the NCGA Awards Banquet and the NCYC State Winners Breakfast.

CLICK HERE to check out the winners in each category from your state.

Shoot a wolf, kill a cow?