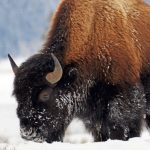 The Montana Department of Fish Wildlife and Parks is now formally recommending the introduction of free-roaming bison in Montana after the release of a long-awaited environmental impact statement.  It’s a move that dramatically intensifies conflict over wildlife management in Montana.

And worse, it’s a sobering message to the thousands of Montanans who provide habitat to wildlife.  FWP has made clear it would rather advance the agenda of a radical, out-of-state environmental group—the American Prairie Reserve—than give even the barest amount of credence to the virtually unanimous opposition to free-roaming bison from Montana landowners.

Let’s be clear about who is driving this process.  The APR derives nearly all of its support from outside Montana.  They are pushing a radical plan to depopulate several million acres in central Montana, replacing those communities with a playground for their wealthy donors.  In the process, their plan would remove a large chunk of Montana’s agriculture output from our state’s economy.

With the recommendation for free-roaming bison, FWP is signaling they’re a willing co-conspirator to the APR’s extreme agenda.

FWP’s recommendation goes directly opposite the policy mandated by Montana lawmakers just one year ago.  In HJ 28, the Montana legislature established a clear policy opposed to free-roaming bison, citing concerns over damage to Montanans’ public lands, threats to wildlife populations, and costs that would be borne by private landowners and rural communities.

Fortunately, FWP lacks the legal authority to unilaterally force free-roaming bison to be introduced anywhere in Montana.  But the fact they are so callously willing to thumb their nose at Montana’s policymakers brings into question what else they might attempt to do.

FWP often says they want decisions to be collaborative.  Actions speak louder than words.  The bison EIS shows a complete disregard to the Montanans who have real-world concerns about free-roaming bison—and at the same time bends over backwards to accommodate an out-of-state group dedicated to dismantling Montana communities.  There was absolutely nothing collaborative in FWP’s free-roaming bison recommendation.

The only people who matter in this issue are those with skin in the game—the real Montanans with something to lose if free-roaming bison are forced onto their property.  They’re fighting for their very lives and livelihoods against the out-of-state elites who want to wipe them off the map.  Who’s side should our Montana FWP be on?