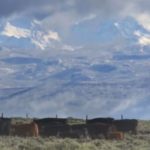 Denver, CO — Wyoming’s legendary cattle drive, the Upper Green River drift, began as scheduled last weekend, just as it has since the 1890s, after a federal judge rejected a preliminary injunction sought by anti-ranching groups that hoped to derail the annual event.

The injunction would have prohibited the lethal removal of documented nuisance bears on their summer grazing range, a regulated practice allowed under the Endangered Species Act since 1975. MSLF argued that the plaintiffs should be denied “standing” because they failed to show how such removals would directly harm them.

The no-kill rule would mark a sudden departure from longstanding bear management protocols on the forest, according to ranchers and their lawyers at Mountain States Legal Foundation, putting numerous ranchers and their livestock at risk. Removal of a problem bear is not done by the rancher, but by state wildlife officials, in consultation with the US Fish and Wildlife Service, after a pattern of repeat behavior has been documented and non-lethal means of deterrence have failed.

“The plaintiffs hope to deprive ranchers of the lawful use of their grazing rights by making the use of this summer range more dangerous than usual for cowboys and cattle,” said Brian Gregg, MSLF’s lead attorney on the case. “Turning the livestock that have traditionally grazed these lands into a grizzly bear buffet threatens the economic survival of these ranches and will destroy this living connection to our history and heritage.”

The Green River Drift is a vital link to the West’s ranching history. The route and manner of the cattle drive are largely unchanged since the 1800’s, and it is operated by the descendants of the families who homesteaded the area and began the cattle drive in the 19th century. Because it is so unique, the Upper Green River Drift is listed as a “traditional cultural property” on the National Register of Historic Places—the only ranching-related entity to be so recognized.

Mountain States Legal Foundation (MSLF) filed a motion to intervene in the case in order to defend the rights of American ranchers to access federal land, as they have for generations, and to protect the legacy of the people who built the West. Western Watersheds Project et al. v. Bernhardt et al. is being heard before the Federal District Court of Washington, D.C.

Against all evidence, environmentalist groups involved in the suit falsely claim that these grazing practices, which have been practiced soundly for well over a century, will harm grizzly bear populations in violation of the Endangered Species Act. In reality, grizzly populations in the region have recovered to the extent that Fish & Wildlife Service officials have twice recommended that the Greater Yellowstone Grizzly be removed from the endangered species list, most recently in 2017. Notably, this remarkable recovery has not been hindered by this ongoing annual cattle drive.

MSLF represents the Upper Green River Cattle Association and the Wyoming Stock Growers Association as well as several family ranches: The Price Cattle Ranch, Murdock Land & Livestock Co., and Sommers Ranch, LLC.  The “land ethic” is a part of this historic way of life. For instance, the Sommers Ranch won the Leopold Conservation Award in 2012 for their remarkable stewardship of Wyoming’s Upper Green River Valley.

“These families have cared for the land far longer and far better than any agency or activist has,” said Gregg. “The Green River Drift provides 124 years of evidence that ranchers are the real conservationists.”