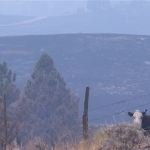 In the letter, Governor Bullock included language that was recommended by the Montana Department of Livestock (DOL) which allows producers to take necessary steps to move livestock across county lines, without prior inspection or transportation permits, when the threat of an approaching wildland fire is immanent.

Also included in the emergency declaration was the suspension of fees associated with the inspections or permits on movements that were necessary to save livestock from an approaching fire. Montana Department of Livestock Executive Officer Mike Honeycutt said in an email to Northern Ag Network, “In cases where wildland fire is a threat, department staff can provide verbal approval on processes to speed up movements of livestock.”

Honeycutt also mentioned they can conduct the required movement inspections after the livestock has been moved to safety. This language may look familiar to some as it was the same recommendations the DOL used in 2017 during the Sand Springs fire which was part of the Lodge Pole Complex that scorched over 250,000 acres.

On Wednesday, seventeen new fires burned over 100,000 acres. Moderate to severe drought conditions continue to exist throughout most of the Central and Eastern portions of Montana. The hot and abnormally dry conditions are predicted to continue through the middle of September, and under current conditions, new wildland fire starts are likely throughout the state.

The executive order is attached here.