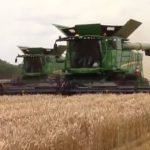 Trade negotiation breakthroughs have largely remained elusive and the U.S. agricultural sector is preparing for its second consecutive harvest under the shadow of hefty tariffs. Lower feed prices, however, are aiding animal protein and dairy margins.

“Global trade tensions are ratcheting up as world economic growth slows,” said Dan Kowalski, vice president of the Knowledge Exchange division at CoBank. “However, the new trade deal struck between the U.S. and Japan is a bright spot and will bolster U.S. agriculture’s competitiveness into a key export destination.”

The historically late planting of the corn crop cast a long shadow through the quarter with extremely volatile cash corn prices. End users like ethanol producers and livestock feeders bid old-crop corn supplies higher in anticipation of a short harvest this fall, with prices falling back to levels seen prior to spring planting.

Farmers continue to hold on to old-crop corn supplies in hopes that prices will recover in the months ahead on local supply shortages. But globally, grain stocks remain ample and are widely expected to dull any significant rallies in corn if harvest reports confirm a smaller than expected U.S. crop.

Soybean prices surged late last quarter based on fears of delayed maturity of the U.S. soybean crop and hopes of resuming China market access. In a sign of good faith ahead of negotiations, which are expected to resume in early October, China exempted U.S. soybeans from additional tariffs.

The already volatile U.S. animal protein markets have gotten even more so in the third quarter on nearly every front: feed costs, capacity disruptions, trade flows, political disruptions and the macro economic outlook. The impact of African Swine Fever on global pork supplies is just beginning to be felt in the U.S. animal protein sector.

While prices have ridden a rollercoaster so far this year based on expectations, reality is now hitting. Trade volume is expanding and will begin to yield benefits to producers across the meat and poultry industries. The expanding trade volume, along with the signing of important trade agreements this summer with Japan and Mexico, will also aid in improving the sluggish level of trade flows so far this year. The new trade deal with Japan also lifts hopes of renewed exports, particularly for U.S. beef and pork.

Fertilizer prices have stabilized after falling throughout the summer. Warehouse fertilizer inventories in the Corn Belt remain oversupplied following this year’s unseasonably wet weather that caused a sharp reduction in planted acreage.

Tags: CoBank, Livestock, markets, wheat
Previous Story
First New Livestock Marketplace in Montana Since 1962?
Next Story
The 2019 Wheat Market Looks A Lot Like It Did In 2016