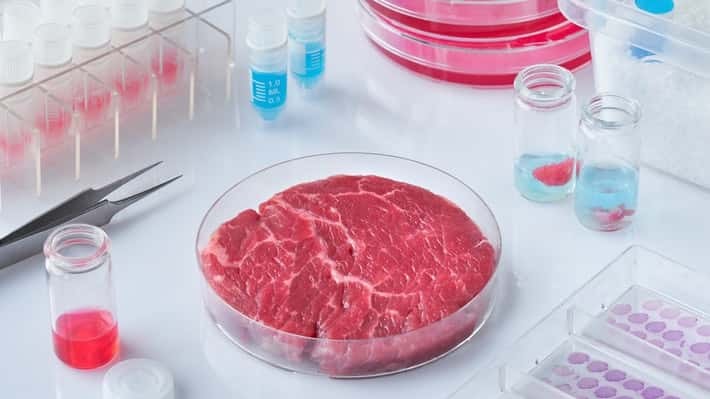 Competition from Plant Based Meat Increasing

It has been clear for some time that plant-based products aimed at current markets for meats are engaged in a serious battle for an extremely important part of U.S. ag producer incomes: those from the production of livestock.

This week, the Guardian is reporting that cultured meat, produced in bioreactors without the slaughter of an animal, has been approved for sale by a regulatory authority for the first time.

So called “chicken bites”, produced by the U.S. company Eat Just, have passed a safety review by the Singapore Food Agency and the company said, approval could open the door to a future when large shares of “meat” are produced without the killing of livestock.

Dozens of firms are developing cultivated chicken, beef and pork and claim to be slashing the impact of industrial livestock production on the global climate crises, as well as providing imitation meat products claimed to be “cleaner, drug-free and cruelty-free.” Currently, about 130 million chickens are slaughtered every day for meat, and 4 million hogs, the Guardian said.

The cells for Eat Just’s product are grown in a 1,200-litre bioreactor and then combined with plant-based ingredients. Initial availability will be limited, the company says, and the bites will be offered in a restaurant in Singapore. The product will be significantly more expensive than conventional chicken until production is scaled up, but Eat Just claims it will “ultimately be cheaper.”

The cells used to start the process came from a cell bank and did not require the slaughter of live chickens. The nutrients supplied to the growing cells were all from plants.

The growth medium for the Singapore production line includes bovine serum, which is extracted from fetal blood, the Guardian said, but “this is largely removed before consumption.” A plant-based serum is to be used in the next production line, the Eat Just company said, but was not available when the Singapore approval process began two years ago.

The companies developing lab-grown meat believe their products are most likely to wean committed meat-eaters off traditional sources. Vegan diets are viewed as unappealing by some, and plant-based meat replacements are seen as more successful in replicating the texture and flavor of conventional meat.

The small scale of current cultured meat production requires a relatively high use of energy and therefore carbon emissions. But once scaled up its manufacturers say it will produce much lower emissions and use far less water and land than conventional meat.

Josh Tetrick, of Eat Just, said: “I think the approval is one of the most significant milestones in the food industry in the last handful of decades. It’s an open door and it’s up to us and other companies to take that opportunity. My hope is that this leads to a world in the next handful of years where the majority of meat doesn’t require killing a single animal or tearing down a single tree.”

But he said major challenges remained, with the reaction of consumers to cultured meat perhaps being the most significant. Other challenges included getting regulatory approval in other nations and increasing production.

“The [Eat Just approval] is a very big deal for the future of meat production globally,” said Bruce Friedrich, at the non-profit Good Food Institute in the U.S. He said cultivated meat is unlikely to become mainstream for some years, until it matched the cost of conventional meat.

So, we will see. Conventional meat producers can be expected to take this new competition seriously, and to put up extended, well-funded fights over the coming years – efforts that likely will be both national and international in their focus and which should be watched closely by producers as they emerge.