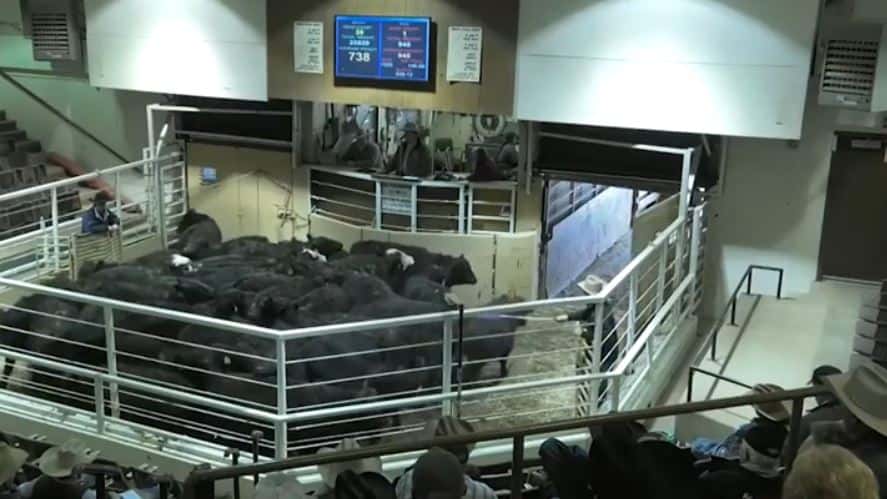 As ranchers become more frustrated with low cattle prices, while the packing segment is making near record large profits, a new grassroots campaign is looking for the support of President Trump on the issue. Our friends at the Western Ag Reporter, have announced a twitter campaign that is going to be aimed directly at the President asking for assistance in re-balancing the cattle markets.

According to a September 9, 2019 report by David Kruse, CommStock Investments Inc., “As a result of the Tyson plant ­beef packers are making upwards of $500 per head while feedlots are losing over $200.” Cow-calf producer, feeder and stockyard owner, said this widening gap has been an issue for the past 20 years.

Joe Goggins, whose family has owned the Western Ag Reporter since 1961, told Northern Ag Network that cow calf producers and cattle feeders bear most of the risk in the beef industry and the losses that they’re enduring right now really threaten the future of rural America.

“When you look at the loss of equity in this industry in the last two years, it’s huge,” Goggins said. “And then you look at what the packers are able to make and there’s a real problem. I think we need some kind of a grassroots movement to let the people that make policy for us know what’s going on.”

“We as cow-calf producers and independent cattle feeders own these cattle anywhere from 120-210 to 365 days a year. We take all of the risk, we fight all the elements, we battle the banker to try to stay ­financed,” Goggins said. “And for what? We’re getting about 43 percent of the market share for what these cattle are worth. For what we have to go through to raise these high quality cattle for these people, we can’t continue to make it for that little of market share. It just doesn’t work.”

Goggins concluded, assuming no hedging or carcass premiums, feedlots lost approximately $15 per head over the last 20 years, according to USDA data.  On average, cow-calf producers have made about $68 per head before paying labor, taxes, interest or general overhead.  Then, the packers who only own those cattle for around a week out of the year are profiting $200-plus per head.

He noted packers certainly deserve to clear a profit in the business but not when it is achieved at the unfair cost of cow-calf producers and independent feeders across the nation. According to Kruse’s report, post-­fire Tyson profits were around $12,500,000 per day – with JBS and Cargill raking in the same amount. Couple this with the ­final of the Big Four packers, National Beef, who earns $7 million per day when profit margins are at $500 per head, and the packers, who control 85 percent of the supply chain, are taking in $44,500,000 per day. According to Goggins figures, on a 24-day kill schedule, at present, the Big Four take home over $1 billion each month.

“What the packers have done since the Tyson plant fire in my mind is criminal,” Goggins said. “You can call it unjust enrichment, pillaging, unfair business practices, whatever… I call it criminal.”

Frustrated with market picture and looking for a change in attitude, Goggins spearheaded a campaign in hopes to reach President Trump with these concerns. He noted that the investigation USDA’s Packers and Stockyards division is leading is a step in the right direction, adding that Western Senators and Representatives do fight for agriculture. But he believes going straight to the top will be the most effective route.

Goggins said he thinks President Trump is a game-changer. “When he says he’s going to do something, he does it. I thought this wouldn’t be a bad idea to get to him.” Of course you can’t just call the President up though. In researching the makeup of Washington D.C. several sources told him if he wants to be heard by President Trump, Twitter is key.

Goggins said he doesn’t really know how Twitter works, but it’s obvious the President watches it. “I think it would be a powerful message to him and the people that make policy, to say grassroots American is hurting,” he says. They taken the incentive away for young people to get in the ag industry. There’s just no profitability right now in agriculture and I think its something we have to address.”

The Western Ag Reporter is helping Goggins launch the #FairCattleMarkets campaign on September 23. They’re asking cattle producers to send tweets to the President all week long to encourage some action. 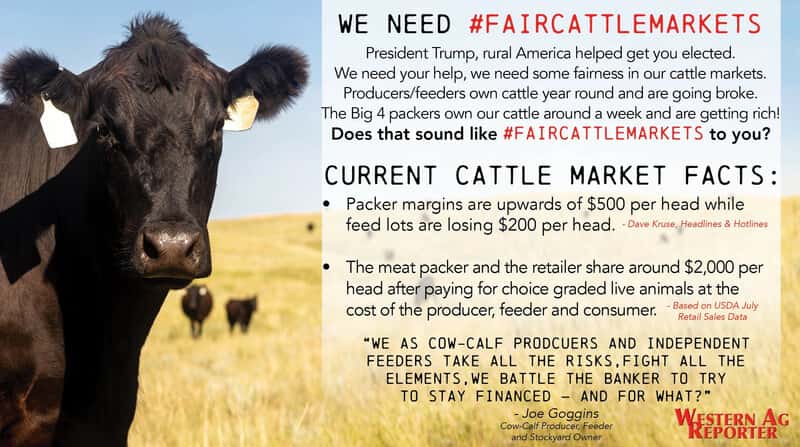 Below are four examples of “Tweets” producers could share in an effort to make the cow-calf and feeders’ voices heard.

It is critical that when participating in the campaign to include the hashtag, #FairCattleMarkets and tag President Trump using his official Twitter handle, @realDonaldTrump.